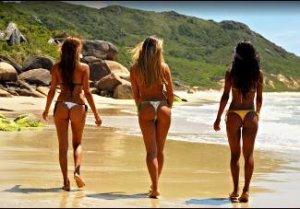 Where are the most beautiful women in South America? I’ve been chasing this answer for the last four-years – possibly longer. I’ve been caught in a triangle between three cities – Florianopolis, Medellin and Cordoba – while I’ve chased this answer. The truth behind the matter is there are beautiful women in most corners of the world but in those locations you will find an uneven ratio of women to men.

When I first came to South America I had no idea I was here for the long run. I originally came here, well, Buenos Aires to start with, thinking I was there for a four-month holiday. My four months soon turned into four-years. For me, summer in Florianopolis – South of Brazil – is second to none. This decision is not only based on the beautiful women but also on the beauty of Florianopolis’ beaches. Summer is from late November to early April.

Medellin is another city in South America, Colombia, loaded with beautiful women – a great city to visit for a one week adventure – although, I stayed there for one year. It’s a prefect place to rest for a few months, too, if you have the time. The city has technology and the dollar to peso exchange is favourable. You can get up to most things in this city and there’s some of the most beautiful women in the world there. It’s proximity to the equator allows for a relatively constant temperature year round to escape the colder temperatures you’ll find in the southern hemisphere during the middle of the year.

Cordoba is a beautiful city in Argentina which is second to not many in the South of America. It’s oozing with young energy thanks to the universities in town and the locals are more than welcoming, too. Cordoba is one of the safest cities in South America if you’re in the well to do areas of the city. There’s a great nightlife there to put the icing on the cake. Cordoba is nice to visit during most times of the year. Although, November and December are a little quiet as the locals are usually holidaying. You should be in Florianopolis during those months, if you ask me.

It’s hard to pinpoint exactly where the most beautiful women in South America are. I suppose, they are everywhere. If you float around the three cities I’ve mentioned your mind will play tricks with you; you’ll never come up with the answer – like me. If freedom is on your side, or you have substantial cash in your pocket, do a year cycle of all cities. Give around four months to each city and you’ll be sure to come out the other side with a smile on your dial.

If you found this writing interesting, or helpful, please support Gaston’s travel and writing with a Facebook “like”.